Faces of Nevada, People of Value 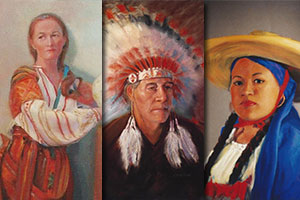 When my son, Brian was about 7 years old, he asked me why some people are called white when they are actually a peach color. And why some people are called black when they are actually a brown color? That got me to thinking… there are people of the world that are as dark as those we call black, yet they are not called black. I thought description of people by hue did not make sense. If hue was not a correct description, what other color characteristic would be more appropriate? Intensity, the brightness or dullness of a color was a no. Temperature, the warmth or coolness of a color was a no?  VALUE, the darkness or lightness of a color was very descriptive. Officer, “he was five foot ten, a number 4 value and was wearing a blue sweatshirt.” Value also is defined as “importance and to regard highly” Perfect! Faces of Nevada, People of Value was born.

I wanted to show who is a Nevadan, the richness and diversity of our area. I wrote letters to many groups telling them of my project and asking if they would have a representative pose for a portrait. I received replies from A-Z. I was very touched by the response. I worked on the show for two years and had representatives from 52 groups. They came in native costumes and their work clothes. There was Vietnamese, Swedish, Washoe Indians, Basque, Korean, etc. representatives. There were cowboys, musicians, artists, miners, business men and women, etc. As an art major with a minor in cultural anthropology, this was a little slice of heaven. While I was working on their portrait, they would tell me of their heritage, explain their native costumes, etc.

This show combined two of my favorite things…art and people. It brought me so much joy while I worked on it and brings a strong sense of pride and accomplishment now. Thank you, Brian for your keen observation and innocent question.

What you can read next